I’m going to take the long way around to get to the point of this post, but I hope the context will be worth it.

I am a member of the Fairview Park Steering Committee (FPSC), which is responsible for the protection and preservation of the park. According to the website for the city of Costa Mesa, Fairview Park is about 210 acres of “Spacious green area for walking, biking, flying model planes & horseback riding.”

From 1997 to 2002, I lived within spitting distance of the park’s entrance off of Pacific Ave. This entrance has only pedestrian access: Cars reaching the dead end must turn around in a tight residential street – no cul de sac here – which has been a nightmare for decades: Damaged property, late night noise, etc.

One of the proposals that has been kicked around for awhile involves a turnaround at the end of the street, just inside the park. Unfortunately, this option hit a snag with the recent passage of Measure AA, which appears to forbid this development on park grounds.

Then I asked myself the question I have relied on so many times in my life; times when I am stuck for a solution. I thought, “What would Walt do?”

I do not consider myself in their league, but that frame of mind has frequently inspired me to think in different ways.

At that FPSC meeting, frustrated by the lack of progress on this nagging problem, I thought of the Imagineers and sketched the area leading up to the dead end. One block down from the troublesome dead end is Wilson St. Then it hit me:

Instead of trying to shoehorn a turnaround at the dead end, or try to circumvent the spirit of Measure AA, why don’t we put the turnaround just one block away at the corner of Wilson and Pacific and erect signage directing people to stop and turnaround there?

I showed the sketch to Costa Mesa Mayor Sandy Genis, who liked the idea and even mentioned it in a recent interview.

Whether the problem gets solved is not the point here, it’s the process, and the people.

Which brings us to today’s solution…

A quick recap: In order to protect precious Estancia High solar panels from errant foul balls coming from the nearby baseball diamond, the district decided to erect 16 or so massive steel poles around the infield and place netting in-between each pole to keep baseballs from straying.

So, the poles were bought and planted. The problem was that the district failed to get buy-in from the homeowners living on Joann St, whose yards line the entire left field line, plus some more. When they saw the poles, they caused enough of a commotion to force the district to remove them.

(NOTE: If you ever want the district to bend to your will, just generate publicity about your cause. That’s usually enough.)

So, the school, the district, and taxpayers are back to square one: The solar panels have no protection from the foul balls.

Then, suddenly this morning, the answer came to me. The sad or funny part is that the solution was quite literally in front of all of us all the time. All we had to do was look across the baseball diamond a few hundred yards to the softball field. If you do, you will see this:

This is an image of an Estancia softball field surrounded by 19 palm trees, each at least as tall as the poles that surrounded the baseball diamond.

You see where I’m going, don’t you? Of course! Just plant palm trees around the baseball diamond and place nets between them in a way that does not harm the trees (not hard). The nets can even be taken down when baseball is not in season – which is most of the year – leaving residents with just the big beautiful palm trees to adore.

I know what you’re thinking: Good idea, Steve – maybe even great – but mature palm trees cost a bundle and the district can’t afford them because they’re spending so much money on legal fees.

True, but there’s a solution for that, too.

Go back to the softball field, look down the right field line, and you will see this: 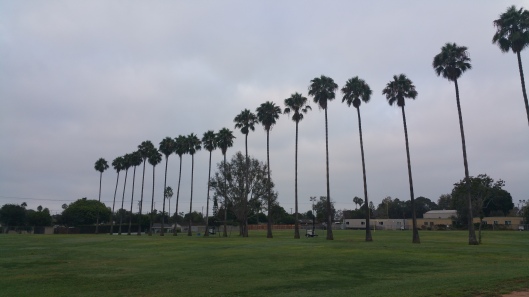 Those are 21 tall, healthy, mature palm trees just waiting for their new home only a few hundred yards away. Oh, and in case you’re wondering, they have no critical function. They serve as a sort of divider between two practice fields and they will not be missed.

Problem solved, and with minimal expense.

This solution did not come to the minds of any of the trustees or members of the administration because they have been thinking one way too long. Some of them are even scared to propose new ideas.

Which brings me around to Election Day. Two school board club incumbents are up for re-election. First, there is Charlene Metoyer in Area 2. She is being challenged by Michelle Murphy. So, if you want some fresh ideas, vote for Murphy.

In Area 4, Karen Yelsey is up against Dr. Gina Nick. Yes, that is the same Karen Yelsey who told us in 2006 that 12 years as a trustee was enough but now wants you to elect her for 16… The same Karen Yelsey who made trustee rubber stamping a campaign issue but who now rarely votes against staff or colleague recommendations. Vote for Gina Nick if you want to send a message that credibility counts.

When you vote out the incumbents, you will send the message that “good enough” is no longer good enough. Only great will do from this day forward.

Vote for Murphy and vote for Nick, not only to send a message, but also because we could use some Imagineers around here.