Last night’s school board meeting was sparsely attended because the board was not giving out any awards.

The dozen or so people in the audience were treated to board member comments that included:

Most of the rest of the comments appropriately referred to local school events that the board members had attended, or descriptions of upcoming school-related events. One refreshing development was verbal exchanges between a couple of the speakers and board president Martha Fluor and out-of-town superintendent Fred Navarro.

Three speakers challenged the concept of Common Core, with an emphasis on the cost and on the assessment (testing) process. The board was admonished by one speaker to avoid teaching morals to kids.

But the highlight was the presentation by Paul Reed, the district’s Deputy Superintendent/Chief Business Official. Prior to Reed’s budget update, Trustee Dana Black encouraged the audience to stick around for Reed’s presentation because it promised to be “exciting” or “amazing” or “stupendous” – something like that. I’m so tired of hearing this same language used to describe just about everything that I’m unconsciously tuning it out.

In any case, the presentation was none of those things. Sprinkled among the data presented by Reed were images of chewing gum and a posed photo of four district officials in what was supposed to be a barbershop quartet – a reference to getting everyone “singing from the same page.” I had to smile at that because that is the least of Reed’s worries: This board rubber stamps everything and hasn’t missed a 7-0 vote since Katrina Foley was a Trustee. They’re not only singing from the same page, they’re in perfect harmony.

Reed did an excellent job of boiling down the figures in the budget to make them understandable to a lay person. That is appreciated.

The problem, however, is that Reed glossed over a major red flag, that is, the district is operating, and will probably continue to operate, only by tapping into its reserves. If the current budget trends continue, and there is a good chance they will, the result will be cuts in programs. This was noticed by former Costa Mesa city council candidate Lee Ramos, who dropped by after attending another meeting.

I sat stunned, waiting for even one of the Trustees to start a discussion on the ramifications of the continued reserve spending. Nothing. Water off a duck’s back. Another day in the life of a “What, me worry?” board.

When Reed finished, however, Trustee Karen Yelsey broke the ice and asked about the reserve spending trend. Yelsey deserves credit for that because I know how uncomfortable it makes the trustees to discuss icky stuff like running out of money. Unfortunately, the conversation, which should have dominated last night’s meeting, was not pursued by any of her Trustee colleagues or Navarro.

Eh, who cares about tapping into reserves, right? There’s always more taxpayer money where that came from. But at least last night we learned a little bit about sailing a boat. 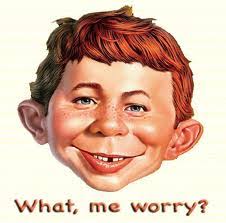 If you’d like YOUR school board to improve, you can let them know one or all of three ways: